This is my travel journal chronicling my 2011 tour of Siberia, visiting with our Russian Lutheran brethren in the Siberian Evangelical Lutheran Church. Hopefully and God willing, there will be future adventures for me there.

The title is based on a remarkable book (that I actually read after returning home from Russia) called Travels in Siberia by Ian Frazier. I found much of his writings to mirror my experiences as an American in Siberia - though Mr. Frazier has made many more trips and experienced many more things than I did - not to mention that he is a better writer. At least for now. Practice makes perfect! Frazier's book (here is a review) is also an interesting look at Russian history and gives an overview of the past writings of American travelers to Siberia. I'm humbled to be yet one more.

I hope that readers of TILS vicariously travel with me and enjoy what I have posted. I hope that it provides a small window into the life and work of the pastors and laity of Siberian Lutheranism (and their extraordinary history) and Russian culture in general.

It is also my hope that readers will: 1) Pray for our Christian brothers and sisters in Russia, 2) Support the outstanding missionary work of the Siberian Lutheran Mission Society, and consider sponsoring a Siberian congregation, 3) Consider visiting Russia for themselves, 4) Support the work of the faithful LCMS pastor Rev. Prof. Alan Ludwig, who has taught at the Lutheran Theological Seminary at Novosibirsk for many years and has much of interest to say from his perspective, and 5) Read Ian Frazier's wonderful book Travels in Siberia (which by the way is available on Nook and Kindle for $9.99)!

Of course, a disclaimer is in order: Ian Frazier has never endorsed this blog, nor have I ever met him or communicated with him. I thoroughly enjoyed his book, however, and am playing with his title for the title of my blog. However, Mr. Frazier, if you're out there - I would love to hear from you some time! I grew up in Cuyahoga Falls - and for some reason, Siberia seems to attract people born in Ohio who feel compelled to write about it. I really did enjoy your book, and I hope you are pleased by my reference to it.
One other disclaimer: other than being a supporter of the Siberian Lutheran Mission Society, I'm not affiliated with SLMS. The material on this blog is mine, and I take sole responsibility for it.
Note: Since I arranged this blog chronologically - which is backward from the way blogs usually work - the buttons at the end that say "Newer Post" and "Older Post" are reversed - just as the "hot" and "cold" water taps are often reversed from the way we're used to them in the states. In other words, if you want to read the next day's installment, click "Older Post" instead of "Newer Post." Just consider this another delightful quirkiness of an American writing about Siberia.
Большое спасибо! Thank you very much!


We have breakfast again at the hotel: eggs, yogurt, tea, and orange juice. We checked out of the hotel, and head over to Father Dmetri’s parish for Sunday Mass. The congregation is called St. James. Father Dmetri renovated the flay himself, and it contains a beautiful small sanctuary. Demetri is a good celebrant, very much
in command.


Today is the feast of St. Thomas the Apostle, and the liturgical color is red. Dan is the preacher, and Father Alexey is his translator.

The service is dignified, but not what we would call “high church.” The altar is adorned with two beeswax candles. The pastors of the SELC do not chant, but the congregations sing their responses. The pastors do not genuflect, but they do elevate the elements as part of the consecration. The liturgy is printed in a bulletin – including the hymns. The SELC has no hymnal. This parish has an organist who plays a small keyboard on a stand. The room is crowded and the congregation sings very well. Most of the women have scarves on their heads.

There are three little girls who take communion – much sooner than in the LCMS.I sit next to Evgeny Dmetriev, whose journey to Lutheran Christianity and role in the establishment of this congregation can be found here.

After the service, we pose for a picture. Father Alexey is the stereotypical photographer. He is armed with his full-sized Nikon digital SLR with flash unit. After Alexey snaps a couple pictures, Father Andrei takes the camera and puts Father Alexey into the picture. He implores us to smile by explaining that we should say as the Americans do: “cheese.”

There then follows a brief order of anointing and laying hands on the sick.

We then head back to the kitchen for tea, coffee, cake, small sandwiches of salmon, salmon caviar, cucumbers, and salad greens. There are also cookies and candies. People are very friendly, though we struggle with the language barrier. I take pictures and some video. Evgeny wants to point out his niece to me. He doesn’t know the word, so he calls up Google Translate on his phone and shows me the word. The other two little girls are his daughters. His niece and daughters are studying English at school, and shyly speak with me a bit.

He tells the story of his daughters’ baptisms, but can’t come up with the English words, and is frustrated. He asks the church organist for help. She is maybe 30 years old, and I understand that she recently joined the congregation through Holy Baptism. She speaks enough English to relate the story.

The girls were baptized by a missionary – who it turns out was sent by the LCMS. However, he left, and the people had no church. This was the situation for a couple years until they contacted Bishop Vsevolod in Novosibirsk and asked if a SELC congregation could be established in Novokuznetsk.

The people are very happy with Father Dmetri.

The members of the congregation are gregarious and span all ages. The ladies implore us to eat and set more food in front of us than we could possibly eat. They also fuss at their husbands, who seem to be able to fuss right back at them. The people greet us again, and we all say our goodbyes.

Alexey, Dmetri, Dan, and I join Andrei in his small Toyota for a drive to see the sights. We are rather cozy in the back seat – three guys. There are very few minivans, SUVs, and trucks here. Gas is expensive and so most vehicles are small.

First, we go to the Novokuznetsk Aluminum Smelter run by Russian Aluminum – where the owner has recently erected memorials to Peter the Great and Stalin – the latter of whom still has some cultic devotion in Novokuznetsk – which used to be named for Stalin.

Smokestacks bellow and the smell of chemicals lingers in the air. Novokuznetsk is the third most polluted city in Russia. Father Alexey translates the Stalin monument, noting the irony and hypocrisy in the boasts on the bronze slab.

We get back into the car and exchange stories of political correctness. Alexey had written a thesis for college admission at the time of the end of the USSR. He wrote it about the novel 1984 – which had only recently become legal to read in Russia.

I told him about my Indian friend Prayag being fired from his job, and even getting a police escort (!) for cracking a private joke to me about the number of Indians on the job. This happened in the People’s Republic of New Jersey. I also told them about the marginalization of American historical figures and about the situation of political correctness in Canada.  Father Alexey translates and relates the stories to Father Andrei - aghast that such things are happening in North America.

Father Alexey also related amusing accounts from his own childhood.

We drove to the Novokuznetsk Fort, and it was now raining heavily. Of course, my rain poncho is back at the church flat, and I did not bring my leather jacket for this trip (it is still in Novosibirsk. I’m a mess. I have things strewn all over the world.  We visit the museum - which is extremely modern and new.  There is not yet any English on any of the exhibits.  A bubbly college student who works at the Fort is eager to speak English with us, and does a very good job even though it is a second language for her.  There is even a non-human patron at the museum.

We went back to the church for a meal of leftovers and good conversation, including a good natured debate about whether or not a piece of bread with meat and cheese constitutes a sandwich. Father Demetri insisted that this was not a sandwich, but a butterbrot (a word borrowed from German that means literally “butter bread”). I think I synthesized the two opposing sides of the argument by folding up the piece of bread, thus enveloping the contents with bread on top and bottom.  Blessed are the peacemakers, and all that.

I took a nap for about an hour. The tea that I have been drinking and the utter lack of soft drinks has left me caffeine-deprived. I’m also still adjusting to the 12-hour time difference. 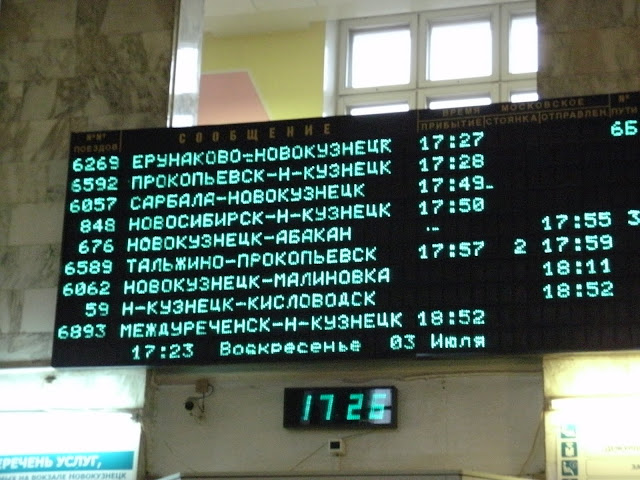 
We gather our bags and Father Andrei drives us to the train station. It is large and busy. We wait inside under the board announcing the trains. Unlike the planes (which run according to local time), all the trains in Russia run on Moscow time – initially giving Dan and me a little confusion.

Father Dan points out a sign in Russian and asks me to read it. I sound out the Cyrillic letters and it says “service center.” They had to borrow a word from English – which suggests that the term was not used during Soviet times – a reflection on the state of customer service. Things are changing in the 20 years since the fall of Communism.

Finally, we need to board. We hurry down a light of stairs, go through doors, exit the building in the rain, climb a large flight of stairs (with steps covered in pools of splashing water), and then walk for about another quarter mile.

At last, the four of us – Dmetri, Alexey, Dan, and myself – board the train to Abakan. Boarding is no problem, and we are directed to a small berth with two bunks above and two below for the four of us.  We drink tea in the traditional railroad mugs - which are glasses that slip into an elegant pewter holder.

We have excellent conversation in our second-class room - private with bunks and a little table.  The seats open for storage, with additional storage over the room door.  It's nearly 1:00 am and the conversation is still going strong.  It is a real joy to be able to pass the time with brothers in the office of the holy ministry!  Dan is finally ready for bed.  He shows me where the bathroom is.  He reminded me of the scene in Transsiberian where they open the door to find that there were no more cars.

The ride is similar to Amtrak, as is the feel of the cabin.  Exhausted, I go to bed myself as the train rumbles on toward Khakassia.

Here are all of my pictures from Day Seven. 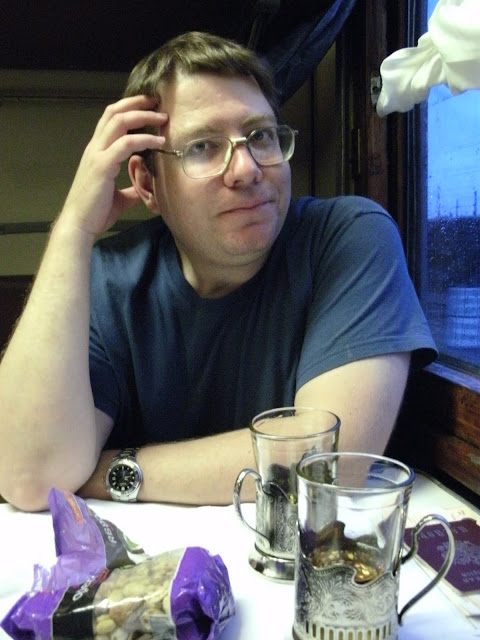 The Other Half of the Truth (video)

Donate to the SLMS