This is my travel journal chronicling my 2011 tour of Siberia, visiting with our Russian Lutheran brethren in the Siberian Evangelical Lutheran Church. Hopefully and God willing, there will be future adventures for me there.

The title is based on a remarkable book (that I actually read after returning home from Russia) called Travels in Siberia by Ian Frazier. I found much of his writings to mirror my experiences as an American in Siberia - though Mr. Frazier has made many more trips and experienced many more things than I did - not to mention that he is a better writer. At least for now. Practice makes perfect! Frazier's book (here is a review) is also an interesting look at Russian history and gives an overview of the past writings of American travelers to Siberia. I'm humbled to be yet one more.

I hope that readers of TILS vicariously travel with me and enjoy what I have posted. I hope that it provides a small window into the life and work of the pastors and laity of Siberian Lutheranism (and their extraordinary history) and Russian culture in general.

It is also my hope that readers will: 1) Pray for our Christian brothers and sisters in Russia, 2) Support the outstanding missionary work of the Siberian Lutheran Mission Society, and consider sponsoring a Siberian congregation, 3) Consider visiting Russia for themselves, 4) Support the work of the faithful LCMS pastor Rev. Prof. Alan Ludwig, who has taught at the Lutheran Theological Seminary at Novosibirsk for many years and has much of interest to say from his perspective, and 5) Read Ian Frazier's wonderful book Travels in Siberia (which by the way is available on Nook and Kindle for $9.99)!

Of course, a disclaimer is in order: Ian Frazier has never endorsed this blog, nor have I ever met him or communicated with him. I thoroughly enjoyed his book, however, and am playing with his title for the title of my blog. However, Mr. Frazier, if you're out there - I would love to hear from you some time! I grew up in Cuyahoga Falls - and for some reason, Siberia seems to attract people born in Ohio who feel compelled to write about it. I really did enjoy your book, and I hope you are pleased by my reference to it.
One other disclaimer: other than being a supporter of the Siberian Lutheran Mission Society, I'm not affiliated with SLMS. The material on this blog is mine, and I take sole responsibility for it.
Note: Since I arranged this blog chronologically - which is backward from the way blogs usually work - the buttons at the end that say "Newer Post" and "Older Post" are reversed - just as the "hot" and "cold" water taps are often reversed from the way we're used to them in the states. In other words, if you want to read the next day's installment, click "Older Post" instead of "Newer Post." Just consider this another delightful quirkiness of an American writing about Siberia.
Большое спасибо! Thank you very much! 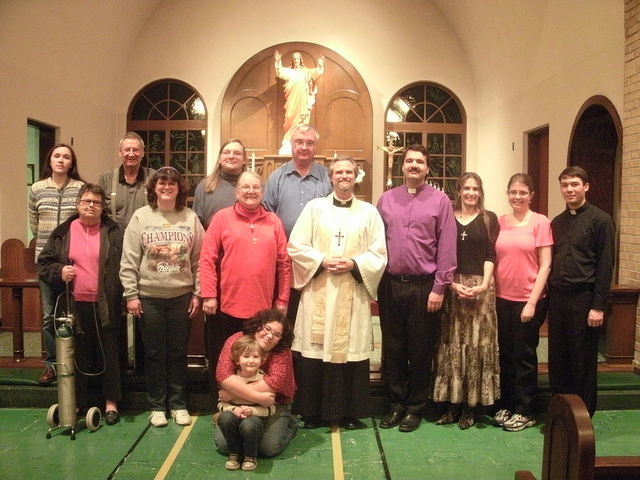 On January 31, 2012 the visit of Rev. Dan Johnson and Bishop Vsevolod Lytkin, Rev. Dmetri Dotsenko, and Miss Natasha Sheludiakova to Salem Lutheran Church in Gretna, Louisiana was written up in the Times-Picayune's February 16 edition, which you can view here.  The print edition included
the above photo.


The delegation also toured downtown Gretna and took in some jazz in the French Quarter.  You can see pictures here (via Flickr) and here (via facebook).

It was a great joy to see three of my Russian friends again, and to be able to reciprocate - at least in a small way - the love and hospitality shown to me.

I learned that we Americans are too fat physically, too lazy intellectually, and too lukewarm spiritually. I learned to appreciate not only our freedom to worship, but also the ubiquity of churches and the fact that in spite of her waning influence on American culture, the Church still holds some sway.  The Church's worst enemy is not the state, but rather the state of our own spiritual torpor and loss of ardor, the taking of grace for granted, the substitution of entertainment and toys for Christ.

I learned that it is important to study foreign languages - especially conversationally (not just out of a grammar text).  It is important to see the world and to be a foreigner, to be on the receiving end of being out of one's element.  It develops compassion.  It is important to be patient with those who don't understand our language and our culture, and there is much to learn by stepping outside of one's comfort zone.

I learned to say "yes" a lot more and "no" a lot less, to seize opportunities when they come, to take some risks, and to enjoy the ride.  I learned to humbly depend upon and appreciate the people that the Lord provides to take care of me in my own deficiency and dependency.  To be a Christian is to be interdependent - upon the Lord and upon the intercessions and aid of our fellow Christians.  Christianity and hospitality are intertwined and inseparable.

I learned that Russia is an enormous, complex, at times sullen, often joyful, historically cloudy, and yet hopeful nation and people, that tyranny and Communism cannot remain forever, that wherever the state brutalizes its own citizens heroes will rise up and eventually restore liberty.  I learned that people bear the scars of their oppression, but can also rise from the depths to become compassionate and able to look to the future, holding onto their faith, and refusing to be broken by the enemies of the cross.

I learned that Christianity - including our Lutheran tradition and confession of the Bible and the Book of Concord - transcends not only space and time, but culture and language and history.  I learned that Holy Scripture speaks to the heart of every man regardless of his national origin or identity, and that the Holy Spirit, working in ways that are impossible according to the mathematics of the world, draws men to the truth of Christ, the cross, redemption, and eternal life.

I learned that I would very much enjoy seeing my Russian friends again - especially my intrepid brothers in the office of the holy ministry serving in the vast regions of Siberia.  I would love to have another shot at speaking Russian and praying the liturgy and taking Holy Communion yet again with my brothers and sisters in Siberia.  I hope to again ride the trains, eat the food, and see the sights of Russia.  I think I'm a different person as a result of my adventure, and I hope it has improved my perspective on life in our fallen world at this time and in this place, in our own country, culture, and church life.  I also learned how much I love my family!

I learned to appreciate the realities that the world is small, Russia is huge, the Church is universal, and God's grace is without bounds.

Мир всем!  Peace to all!

The Other Half of the Truth (video)

Donate to the SLMS